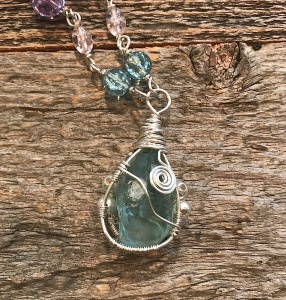 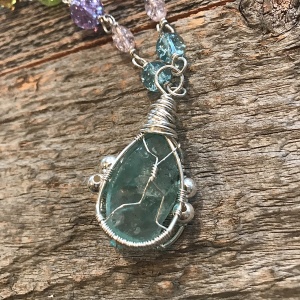 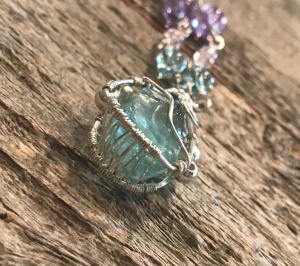 One of my brothers and his family have a cabin on Butterfield Lake in New York.  He was given a piece of  historical Redwood Glass and I was bestowed with the honor of creating this custom necklace for his adorable granddaughter to feature it. It was so much fun to design this one of a kind piece, especially since it has such historical significance.  Cali looks adorable modeling her new piece of jewelry doesn’t she! 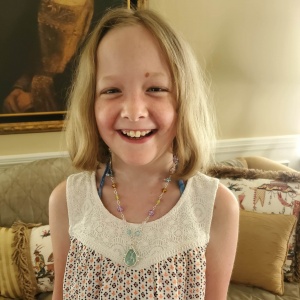 Here is a little bit of the history behind the piece of Redwood Glass that is the focal piece of the necklace:

John Foster was familiar with the glass business and in 1833 chose Jamesville, in the Town of Alexandria, New York, to start his own glass factory due to the local stream which connected two neighboring lakes: Mud and Butterfield. This stream allowed for a supply of water to power the factory and the deposits of sandstone and limestone nearby along with an abundance of wood for fuel that he was looking for. After purchasing the property, Foster built a factory, a kiln, a blast furnace, an office building, a pounding mill and a box factory.

In order to compete with his former employer and now rival Redford, Foster changed the name of the hamlet from Jamesville to similar sounding Redwood. On September 30, 1833, the first glass was produced. The factory was known for making glass for windows, however it is best remembered by avid collectors for the fancy and rare decorative pieces – bowls, paperweights, and canes made by the glass workers in their spare time. Usually these pieces also had an aquamarine tint due to Foster’s original formula for mixing the ingredients.

After three months of production, operations ceased with the sudden death of John Foster in January 1834. After Foster’s death the glass company changed hands several times and the factory was permanently closed in the summer of 1881. The factory building was torn down for timber in 1895. 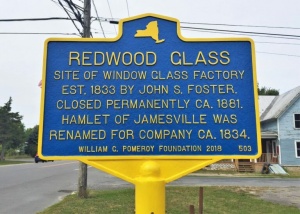 Be the first to learn about our latest products and get exclusive offers.